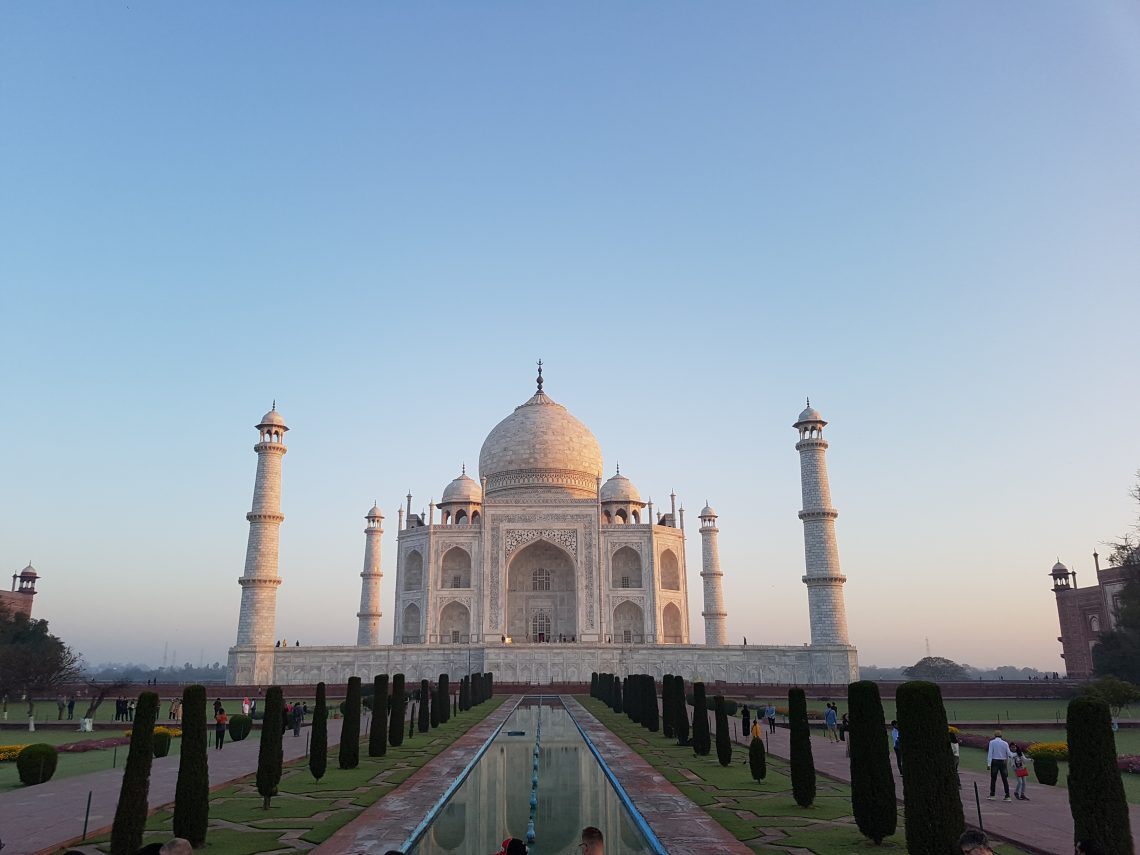 If you’ve been watching my Instagram or Facebook stories, you’ll know that I’ve just come back from a whistle-stop tour of North India with my fiancé and two friends who live there. My two-week adventure starting in Delhi and ending in the Thar desert near the Pakistani border was a whirlwind of colour, curries and commotion.

Visiting this land of extremes and contradictions is like being pulled into a bazaar filled with never-ending shelves stuffed floor to ceiling with bright and elegant saris, exquisite rugs, and all other sorts of exotic antiquities lined up next to cheap plastic tat and convincing knock off books, all half hidden by a generous scattering of rubbish and a menagerie of animals nestled among the chaos. It’s vast but cramped, sumptuous yet bedraggled, promising you the seven wonders of the world if you know where to look.

The whole experience can be overwhelming, especially for the first-time visitor – an experience you can only begin to fully comprehend once you’ve been spat back out the other side, away from the chaos and deafening din of the Delhi streets. A few weeks later in the familiar (and I now realise comparatively clean and quiet) surroundings of Barcelona, I’m still trying to absorb and understand India’s absolute assault on my senses.

With so much to see and do in this huge and bamboozling country, my short journey felt like looking at an impressionist painting from the window of an express train hurtling through the Indian countryside. I got just a brief glimpse, a flavor – but it was nonetheless spectacular.

In the coming weeks I’ll be sharing my impressions so you can get a taster of India’s magnificent banquet for the senses. I’ll be writing about the inspiring and impressive work of SOS Wildlife in Agra, as well as some practical tips for an Indian adventure. This week I’m kicking things off with the first of a two-part series India: The Good, The Bad and The Ugly, starting with the good!

India: The Good (in no particular order)

A definite highlight of our trip has to be the people we met there. With a population of over 1 billion, the sheer number of people everywhere can be overwhelming, especially in the capital, home to around 30 million people – a city about the same size as the populations of Ireland, Norway, Finland, Denmark and Switzerland combined!

Often we found interactions really intense and sometimes intrusive as locals would ask us a lot of questions; what we were called, where we were from, what we did, if we liked India… and this was all just during a brief encounter to buy a bottle of water. People also had strong opinions about where we should visit, eat, pose for photos… and were very enthusiastic about dispensing their advice. This was exhausting after a while but I think in most cases it did come from a natural curiosity and people genuinely wanted to make sure we were having a good time.

Of course, some people definitely just wanted you to buy things from, if not them, their brother or cousin. In this country of entrepreneurs you can always find what you’re looking for. If it’s not in the store you’ve visited, you’ll be directed to some family member or friend who can help you spend your money. Having said that, I found people were not pushy like in Vietnam where we found many people were rude and angry at us if we didn’t buy their wares, or if we gave a tip that was “not big enough”.

So in summary, while interactions can be tiring and intense, the traveller to India will find no shortage of warm, helpful and friendly people who leave a mark on you well after you’ve returned home.

One of the first things that catches your eye about Indian fashion is the colour. Every shade of the rainbow is worn in all combinations possible. Bright blue and hot pink saris, orange and green kurtas, and purple and yellow Indian pyjamas will make you throw everything you know about colour matching out the window. Seemingly clashing hues come together to electrify you with a shock of colour in stark contrast to the dusty streets.

If the colours weren’t enough to grab your attention, patterns of elephants, flowers and camels in addition to tassles and blingy mirrors will certainly make you look twice. And the spectacular array of jewellery from enormous nose rings, heavy anklets, and ostentatious rings will often make you feel shabby and under-dressed in comparison.

Left: Just what she wears on her casual stay-at-home days. Photo by Arindam Deb on Unsplash. Right: vibrant clothes in Jaisalmer Fort

And unlike fancy western clothing, all of this stuff actually looks delightfully comfortable. The use of cotton and other natural materials, as well as loose tailoring makes you think they would be nice and cool even in temperatures of 40℃+. Plus, the Indian custom to remove your slippers or sandals when you enter a shop or temple means you get plenty of barefoot time. Heaven!

Oh my god! The food! I always knew India was going to be a paradise for a vegetarian spice lover, but I didn’t realise quite how spectacular it would be.

Although I realise that we must have only tried a minute fraction of the amazing food served up across India, what we ate blew us away and changed everything I knew about Indian cooking. The first thing that surprised me was the bizarrely fantastic flavour combinations.

Where else would you dare add paneer tikka to a pizza? Who would think a broccoli, pineapple and cheese curry would be a mouth-watering mix? Or that cashew nuts and sultanas would be a mind-blowing curry base? And there was nothing subtle about these food pairings. It seemed you could never really add too much of anything– salt, spice and sugar included.

Speaking of sugar, aside from India’s world famous curries, its vast array of extremely sweet, often milky and sometimes fried desserts were something else. Although I didn’t try very many desserts, (something I regret now), a special mention goes to Rasmalai, balls of cheese curd soaked in malai (clotted cream) and flavoured with cardamom which are then cooked in milk with saffron and pistachios. Yum!

Aside from the unorthodox mix of ingredients, we were also surprised by how much the same dish can vary between different states and restaurants. Although I tried to taste as many different dishes as possible, I did have my favourites (ker sangri– a curry based on a sort of desert caper plant, and cashew curries) which I repeated, but the same dish was served in a variety of ways with some ingredients being omitted and others added depending on who was making it.

This made dining experiences akin to Russian roulette and also attested to the fact that our food was made fresh. We weren’t eating some one-size fits all industrial curry bought from a caterer and hastily heated up. Of course, making dishes from scratch takes time so we sometimes had to wait half an hour for our meal, but it forces you to slow down and it’s a welcome break from the frenetic and furious pace of the traffic, not to mention the heat which already weighs down heavily in spring time.

While we spent most of our India trip in Rajasthan, where they’re big on ghee (clarified butter), milk, cheese and yoghurt – basically anything dairy, there is immense variation between the food in India’s 28 states. As a traveller is unlikely to visit all of them, a marvellous way to eat your way through India is to visit the state houses in Delhi, where there are bhavans (big houses) representing each state.

We visited the bhavan for Andrah Pradesh, one of India’s southern states, where we were treated to an all-you-can eat spicy thali. This was our first meal of the trip, and my fiancé’s favourite, who jokingly calls it “rice with mind-blowing sauces” (he’s not wrong though). At 300 rupees (around 3,50 Euros) this meal was quite expensive for Indian standards, (you can easily find them for just 100 rupees), but for a foreign visitor I think 300 rupees for the best thali of your life is a fair deal!

This place wasn’t fancy but the food really was something else. As in Spain, some of the best food available is served in relatively … let’s say homely environs with no frills – the noisier, busier and shabbier the aesthetics are, the better the food is.

The humble beginnings of one of the best curries of my life at Vijay restaurant, Jodphur

In summary, India’s mind-boggling variety of bold dishes will excite your taste buds with their liberal use of diverse and contrasting condiments, leaving you longing for more long after you’ve returned to your comparatively boring Sunday dinner with only salt and pepper to cheer it up.

India’s nature is as varied as its food and people. This megadiverse country boasts the Himalayas in the North, incredible evergreen rainforests in the South, marshy mangroves to the East and the arid Thar Desert to the west. So whether you dream of trekking through the jungle, hiking in the mountains or feeling like an extra in Arabian Nights, India has it all!

And animal lovers won’t fail to be impressed by the country’s outstanding biodiversity. During our short stay we saw monkeys, elephants, scorpions, dung beetles, gazelles, wild camels, sloth bears, cobras, mongeese, peacocks, chipmunks and of course the ever-present cows and adorable street dogs. And no, we definitely didn’t go to any zoos, we saw most of these on the street!

That’s it for this week. I hope you enjoyed this article all about the highlights of India and it’s given you some inspiration for a future trip! Stay tuned next week for part 2 of India: The Good, The Bad and The Ugly.

Sending you sunshine and positivity!