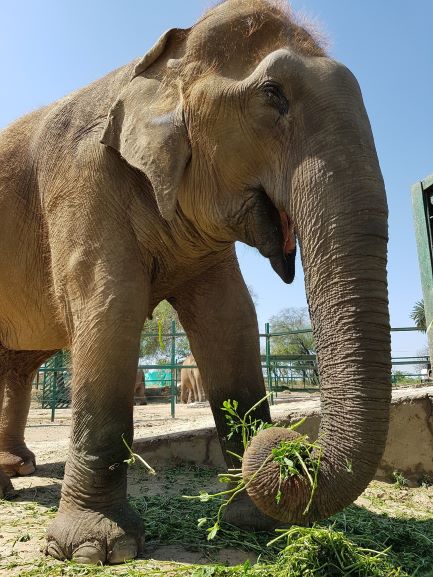 For most travellers to India, the city of Agra in the small northern state of Uttar Pradesh is synonymous with the glorious Taj Mahal palace. While the spectacular Taj definitely deserves its place on the well-trodden tourist trail around north India, today I’d like to suggest you take a walk on the wild side and venture off the beaten path — Welcome to Wildlife SOS!

Wildlife SOS (WSOS) is a conservation non-profit set up in 1995 to protect and conserve India’s natural heritage, forest and biodiversity, and is currently one of the largest Wildlife Organisations in South Asia. Its main missions are:

(1) conservation and protection of wild populations and habitat

(2) rescue of injured and displaced wildlife, and to look after the welfare of captive populations

(3) research into better protecting and caring for wildlife

WSOS leads a massive variety of projects: battling illegal animal trading and poaching, advocating for wildlife within the legal and legislative systems, mitigation of human-wildlife conflict, and organising awareness workshops, to name just a few.

And the projects are just as diverse as the huge variety of animals they rescue every year ranging from snakes illegally captured by snake ‘charmers’, peacocks poisoned by pesticide, elephants enduring a life of cruelty in the tourism industry, and sloth bears forced to ‘dance’ for entertainment.

In fact, their groundbreaking work successfully eradicating the barbaric practice of ‘dancing bears’ is what the non-profit is best known for. Let me tell you more about it.

India’s sordid past of Dancing Bears

Sloth bears are adorable, medium-sized bears found in India, with soft, fluffy fur, and long tongues to lick up honey and unsuspecting ants. They spend most of their days bumbling around finding trees to scratch their backs on. In fact, the Jungle Book’s lovable character Baloo is probably a sloth bear!

Historically, they’ve been exploited for entertainment by a nomadic tribe known as the Kalandars, who made money from the bears by forcing them to ‘dance’.

Of course, no bear in the world stands on its hind legs and twirls around incessantly for fun. The process of ‘taming’ a sloth bear starts when they are just babies. After being ripped away from their mothers in the wild (who are then often killed), the cubs are prepared for ‘training’ by having their claws and teeth removed, a red hot poker driven through their muzzle with no anesthetic and a metal ring attached to a coarse rope strung through the wound. The bear tamers then yank on the rope, as well as beating the bear with a stick to make it hop around frantically in pain, collecting coins from tourists and Indians alike in the cities and villages.

Despite the practice having been officially outlawed by the Indian government in 1972, for many sloth bears the abuse continued. This was the only miserable existence they knew until non-profits like Wildlife SOS stepped in. In 1995, Wildlife SOS co-founders Geeta Seshamani & Kartick Satyanarayan investigated the illicit practice and through their detailed analysis brought to light  the desperate economic conditions facing the Kalendar community, who were dependent on the income from the dancing bears. Wildlife SOS recognised that if they wanted to end the practice permanently, they would need to work with and not against this nomadic community.

With this in mind, WSOS as well as the Ministry of the Environment and the Indian Government gave aid to this community by helping them start up new businesses which did not involve animal exploitation, such as setting up their own shops. Women were given the opportunity to become financially independent for the first time, by receiving training to make jewellery and clothes which they could go on to sell. Over 5,000 children in the Kalandar community were also enrolled in school and regularly provided with school supplies, allowing them to gain a formal education.

By giving incentives not only to the tamers to surrender the bears, but to the whole community, Wildlife SOS have made sure that future generations do not have to resort to animal abuse to make a living.

Such a holistic approach has resulted in a win-win situation for both the sloth bears and the over 3,000 families that were formerly dependent on wildlife crime. Recognising and acting on this need to assist these communities to find a sustainable way to support themselves in the future, is what makes Wildlife SOS stand apart from many other conservation organisations.

Thanks to WSOS and its partner organisations such as International Animal Rescue, One Voice and Free the Bears, over 620 bears have been rescued and rehabilitated and the practice of the ‘dancing bear’ in India has been eradicated. So often in conservation we only hear the bad news – that yet another species has become extinct, that more coral reef has died off, that more turtles are under threat from plastic pollution… Of course it’s essential that we hear these hard truths, but it’s also vital that people hear about the success stories so they know there is still hope and see that we can make a difference.

Although the tale of dancing bears has a happy ending, it’s vital that anti-poaching efforts continue, as bear parts are still being trafficked for use in Chinese medicines and gourmet cuisine in South-East Asia, contributing to the declining numbers of sloth bears in the wild.

If you would like to see sloth bears up close and learn more about WSOS’s work with these beautiful creatures, I would highly recommend a visit to the Agra Bear Rescue Facility – the world’s largest centre providing long-term care to rescued bears.

Although WSOS is internationally known for its pivotal role in eradicating the practice of dancing bears, they are becoming increasingly well-known for their rescue and rehabilitation of elephants.

Their Elephant Conservation and Care Centre was created in 2010 to rehabilitate severely abused and exploited elephants, and nowadays houses over 25 of them, many of which were rescued from a lifetime in captivity where they were forced to beg on behalf of their abusive owners, work as temple elephants, perform in circuses and give rides to tourists, among countless other atrocities.

Like the sloth bears, elephants in captivity face a similar life of cruelty and abuse, starting with being poached from the wild as babies, isolated from other elephants and beaten until coerced to do anything. The ‘taming’ method for an elephant usually goes like this: baby elephants are kept in a small cage similar to those used in intensive pig farming, and they are tied up with ropes so they can’t move. The elephant will then be subject to repeated beatings with nails, sticks, chains and bullhooks. In a process lasting several weeks, the animal is starved of food and water while enduring sleep-deprivation, until they submit to their owners, who can then use them for financial gain. This cruel practice is aptly called phajaan or “breaking of the spirit”.

All captive elephants will go through at least some form of this vicious ritual. Next time you see an elephant used to give rides, or appearing in a film, the signs of abuse will be easy to spot. Shredded ears where they have been torn by bullhooks, nasty skin conditions, lacerations all over their body and tears in their eyes are all indications of abuse. It’s simple really —  no wild elephant would voluntarily paint pictures, perform in the circus or let people ride them. Only a creature that has had its spirit crushed through abject torture would submit to such unnatural behaviour. While in Europe you’d be hard-pressed to still find a circus with real elephants, it is estimated that there are approximately 2,700 captive elephants all around Asia that are still actively subjected to some form of exploitation.

Such abuse is particularly sad when we consider that elephants are among the most intelligent of all land mammals. Elephants exhibit renowned cognitive skills and share many behavioural traits with humans. These sensitive souls exhibit grief, altruism, compassion, cooperation, self-awareness and have excellent memories. They remember other elephants and humans they had met briefly decades previously, and they will certainly never forget the anguish they endured all their captive lives.

As visitors to the Agra Elephant Conservation and Care Centre, it was heartwarming to see elephants which had endured a lifetime of cruelty finally be able to spend their days in peace, enjoying long relaxing mud baths, receiving a nutritious diet and veterinary care, as well as enjoying a daily stroll in the open fields with their friends.

Some phoney ‘sanctuaries’ are more like petting zoos and little other than dressed-up tourist traps where the mistreatment of animals is commonplace. In total contrast, at Wildlife SOS’s rescue centre in Agra, only small groups of visitors are allowed to come on a prearranged visit, and no touching of or direct interaction with the elephants is allowed. Elephants are in no way made to perform for visitors and riding is of course banned. Although these elephants would not be able to survive in the wild again following decades of captivity, they are well cared for and live as natural a life as possible in the centre.

How can I visit Wildlife SOS?

Some of the cheeky critters we met during our visit

I was deeply impacted by the life-changing work Wildlife SOS is carrying out and would wholeheartedly recommend that anyone visiting Agra should carve out a firm place in their itinerary to visit both WSOS centres in Agra to see the projects first-hand. We hired a driver and visited the Taj Mahal, the Agra Bear Rescue Facility and Elephant Conservation Centre all in one day, with time to get the 5 pm train back to Delhi, so it’s definitely possible to have this eye-opening experience on a day trip!

For more information, check out Wildlife SOS’s website to find out more about how to visit the Agra Bear Rescue Facility and Elephant Conservation and Care Center. Make sure to get in touch in advance by sending an email to [email protected] to organise a customised visit. It’ll be the highlight of your trip to Agra!

What can I do to help?

My visits to both the elephant and bear centres left me emotional, and a lot of tears went into writing this article. The way humans treat their fellow living creatures is disheartening to say the least. We call people ‘animals’ when they act aggressively, brutishly and uncivilised, but really, animals don’t hold a candle to the depths of fiendishness us humans are capable of on a regular basis. In fact, it’s animals who time and time again surprise us with their altruism and affection towards humans.

But I’m also optimistic. Yes, there is still an enormous amount of needless animal cruelty going on today all over the world in the name of entertainment, medicine, food, or whatever other reason you can find a justification for, but there are also beacons of hope like Wildlife SOS.

Successful conservation projects like eradicating the practice of dancing bears shows that we can put a stop to traditions of cruelty, with some understanding, problem-solving, commitment and will.

As more people shun the use of animals for their own perceived gain, I like to think we can stride in the direction of a world with a little less suffering, and a lot more love and compassion.

Sending you sunshine and positivity, Chelsea!

10 Things You Should Know Before Going to India