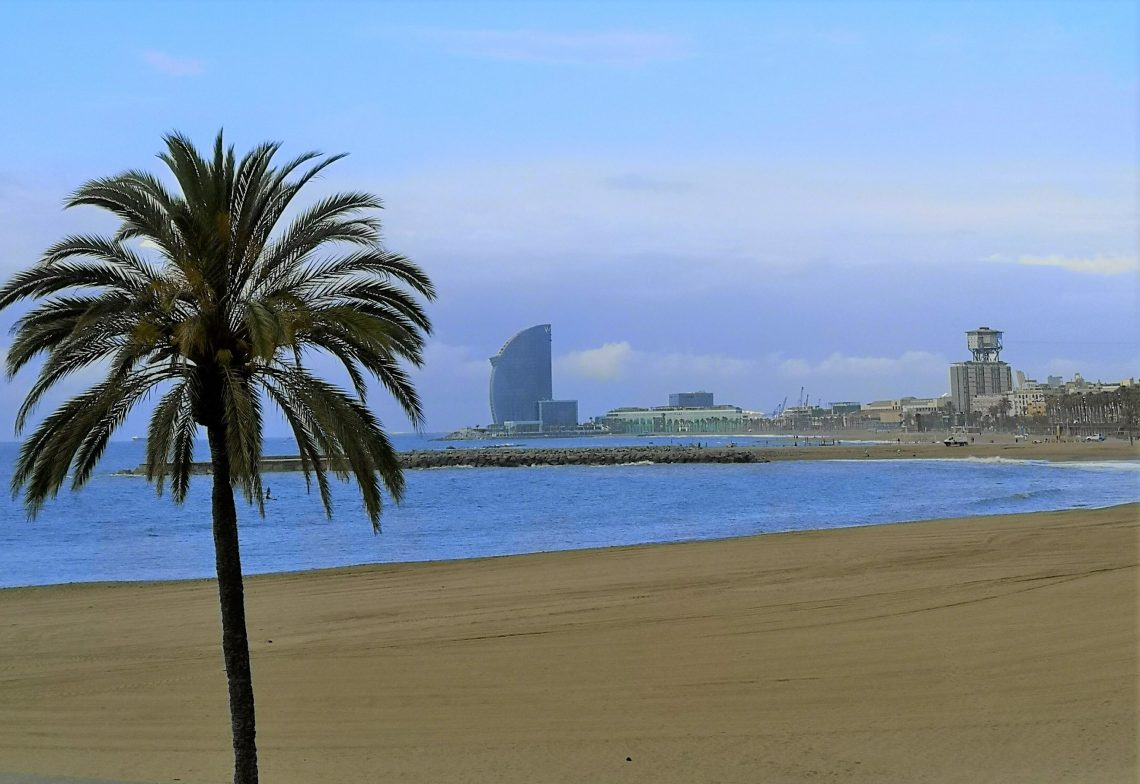 Attracting around 83 million tourists every year, Spain is the second most visited country in the world. So what happens when a global pandemic grinds international travel to a halt? Is the country falling apart with the loss of an industry accounting for 12% of the economy? Or are we living in the tourist-free utopia some locals have dreamed of for years?

Following some research, talking to other Spanish residents and reflecting on my own tourist-free experience, it’s clear that there are some incredible highs and lows in this unprecedented traveller-free Spain. While most of these insights refer specifically to Barcelona, we’re seeing similar patterns up and down the country. As I always like to end on a positive note, let’s start with the negative effects we’re already seeing.

Already having the second-highest unemployment rate in the OECD, currently hovering around 20% (more for youths), a record high of 3.54 million have lost their jobs. As of April 4th, 206,016 jobs unemployment claims were registered in the tourism sector alone, which provides 13% of the country’s jobs. And these figures don’t include the around 2.5 million people who have been made temporarily unemployed and received an ERTE. (An ERTE is a temporary employment regulation which allows companies to suspend employment contracts or reduce working hours due to force majeure.)

Naturally, the impact has been particularly devastating in the most visited areas on Spain’s Mediterranean coast such as Costa Brava, Barcelona, Salou, Costa Blanca, Costa del Sol, as well as the Balearic and Canary Islands. To cite an anecdotal example of the damage to the sector, one of my friends working in an international hotel chain saw half of her colleagues lose their jobs just 2 weeks after Spain’s state of alarm was declared on March 14th, and many more had their working hours reduced to 30% – not even enough to cover rent.

In Barcelona alone it’s estimated that between 3,000 – 6,000 businesses won’t reopen. Although many stores have now reopened, many shops are simply liquidating their stock before pulling down the shutters forever. Of the businesses that rely on tourism, it’s estimated that 35% of them will have to close for good. The effects of the closures are being felt most acutely in the city’s most visited areas such as Ciutat Vella, Eixample and the area around Sagrada Famillía. Living in the heart of Barcelona’s Gothic Quarter, I’ve witnessed first-hand how the Old Town’s once bustling streets became a ghost town, with the otherwise bustling Las Ramblas remaining eerily empty.

As many people working in the tourism industry such as tour guides, hotel staff, as well as shop and restaurant workers relying on tourist footfall have lost all sources of income, people are increasingly struggling to make ends meet. These financial stresses have been exacerbated by the government’s late payment of unemployment benefits. As a result, long queues can be seen everyday outside churches and soup kitchens as people have no choice but to resort to food banks.

Some have even reported feeling less safe on the the street, whether because fewer people are out in the street at night, or because they’ve heard of more incidents of aggressive and violent attacks – as Barcelona’s many pickpockets are deprived of their usual easy targets of relatively rich and tipsy tourists, they are becoming increasingly desperate and some say the brashest among them are turning from pickpocketing to violent muggings, some in broad daylight.

Although tourism is an important economic driver which creates a lot of jobs, many Spanish residents would agree that several popular holiday resorts and cities have as a result transformed into theme parks to please the whims of international tourists at the cost of the local culture, and deteriorating the quality of life for locals. Whilst it’s still too early to predict the long-term impact of reduced tourism in Spain, so far there have been several positive changes.

Residents are rediscovering their local area

The first is that locals have been rediscovering where they live and reclaiming popular tourist areas. Here in Barcelona, residents have been delighted to stroll around an almost empty Parc Güell and the Sagrada Familia free of charge, have a pleasant drink at Plaça Reial without the usual anti-social behaviour of rowdy hen and stag parties, and shop in a Mercado de la Boquería that’s blissfully free of selfie-sticks.

As Europe’s fifth most populated city, Barcelona residents are really benefiting from the lack of tourists in the form of more physical space and smaller queues. Devoid of the usual hordes of tourists that descend on popular tourist spots like Plaça Nova and Las Ramblas, locals are no longer relegated to the sidelines. Tourists’ departure has resulted in a refreshing addition to the city’s landscape – children. It’s such a pleasure to see kids running, skipping, cycling and rollerblading around areas which were previously overcrowded no-go areas just a few months ago.

Another important area where residents are seeing positive developments is housing. For years there has been increasing pressure on affordable space, in part caused by population increase and gentrification, but also exacerbated by prime living space being used for tourist accommodation. It’s thought that rental platforms like Airbnb are responsible for about 7% of price increases in Barcelona’s visited areas. The relentless saturation of the Old Town became increasingly clear to me during the first few months of confinement when citizens applauded front-line workers from their balconies every evening and I saw the majority of apartments on my street were unoccupied. My street was home to more empty flats than neighbours!

This is no longer surprising when you learn that Barcelona has 1 tourist apartment for every 50 inhabitants. Renting out a flat as a holiday apartment for an average price of 150 euros per day is obviously far more lucrative than renting to locals living on Spanish annual gross salary of € 27,537.

Since tourists packed up their bags at the start of the year, we’ve already seen 4 out of 10 tourist apartments reconverted into residential apartments and prices sink down to 2008 levels. The emergence of at least 4,000 former tourist apartments on the market has been a welcome relief for Barcelonians struggling to find decent and affordable housing.

Now that Spain is devoid of tourists there is also the sense that many councils are refocusing and repositioning locals as the protagonists.

In light of the sometimes prohibitively expensive entrance tickets, Barcelonians have been calling for free access to the city’s monuments for years. Now it seems their call has been heard. From mid-July, Sagrada Familia is opening its doors free of charge to residents. Parc Güell is once again free to the public and other tourist sights are advertising special prices for locals

Yet another positive change is the closure of some of the city’s countless tourist traps. Deprived of their usual clientele, numerous tacky souvenir shops and overpriced bars on Las Ramblas charging 20 Euros for a drink are closing up shop. This can only be a good thing for tourists and locals alike. In their place we’ll hopefully see the development of business and services that serve the needs of the community and increase the quality of what’s on offer for tourists – a win-win for everyone.

So, nightmare or utopia?

Ultimately, whether or not Spain is better off without mass tourism is a matter of opinion. For those working in the tourism or hospitality industry, the exodus of tourists has put their livelihoods at risk and caused serious financial worry. While for some this means temporary unemployment or a pay cut, for some there’s a risk they could become unemployed long-term, depending on how quickly tourists return to Spain.

On the other hand, for many Spanish residents, the past few tourist-free months have been a welcome relief. Locals are visiting previously “no-go” tourist areas, and are seeing the city through new eyes. After consulting a Barcelona Expat Facebook Group, most of the feedback was overwhelmingly positive. Some comments that kept coming up were:

“I’m falling in love with the city again!”

“It’s amazing to walk around without the menace of Segways and rickshaws speeding around.”

“Barceloneta beach is beautiful and relaxing”

Whatever you make of Spain’s lack of tourists, one thing’s for certain. A Spain without tourists won’t last for long. The Balearic Islands already opened up to German tourists on the 15th June and with the country “reopening” on July 1st, it won’t be long before party and sun-seeking visitors flock to Spain’s sandy shores once again.

So for now, let’s try to enjoy our streets which we’ve found a little quieter, but in some ways more full of life than ever before. Hopefully we can also take this opportunity to re-imagine tourism in Spain for the better; fostering more sustainable tourism that doesn’t come at the cost of locals, while also giving a better experience to holidaymakers.

Sending you sunshine and positivity from a (at least for now) tourist-free Barcelona!

Are you living in Spain? What has been the effect where you are?

5 Reasons To Make Menorca Your Next Holiday