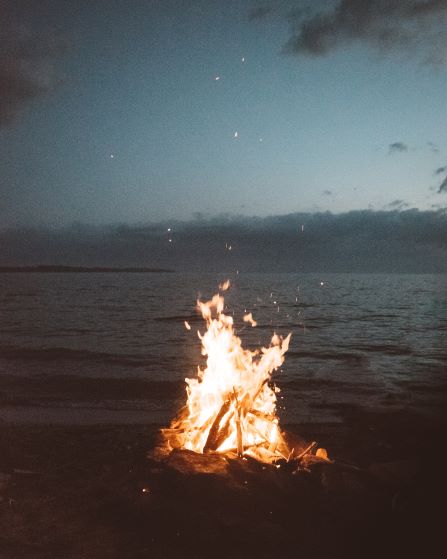 In the days leading up to 23rd of June, it’s impossible not to to feel the spark of excitement in the air: people are bulk-buying cava, bakeries are selling huge sweet flatbreads, long queues are spilling out of small shops selling solely petards (fireworks), and everyone’s talking about their plans for Sant Joan. If you’re new to Catalonia and wondering what all the fuss is about, you’re probably asking yourself, “What’s Sant Joan?”. In this article we’ll take a look at what it is, where, when and how it’s celebrated, the origins and significance of this Catalan tradition, as well as how 2020’s festivities will be different in a COVID-19 world.

Sant Joan – What, Where and When

The day of Sant Joan (Saint John) is celebrated every 24th of June in Catalonia, the Balearic Islands, Andorra, Valencia and some Catalan-speaking parts of France. Although Saint John’s Day is the 24th, the celebrations actually start the evening before on the 23rd – La Nit de Sant Joan (St John’s Night). Many offices close early, allowing workers to start preparations for the night’s revelry involving: all-night parties, copious amounts of cava drinking (okay, maybe that’s just me), bonfires, and (in true Spanish style) questionable health and safety enforcement. So if you don’t want to be in the firing line of a five-year-old’s firecracker whizzing over your head, stay at home!

Despite the extreme noise pollution and serious risk of pyrotechnic-related injuries, Sant Joan, or La Nit de Foc (Fire Night) as it’s often called, is one of the most important days of the Catalan calendar and should be experienced at least once! Reminiscent of New Year’s Eve or the UK’s Bonfire Night (but with much hotter weather) crossed with a pagan summer solstice party, this mega fiesta is a great opportunity to get together with friends and family and party until sunrise!

How do you celebrate Sant Joan?

1. Make plans with a group of friends

Being by yourself for Sant Joan is the equivalent of spending Christmas or New Year’s Eve at home alone. Everyone will feel sorry for you and the non-stop celebrations will give you serious FOMO. So whatever you do, make sure you spend the evening with friends!

Like most festivities, Sant Joan involves plenty of eating and drinking! The culinary star of the show here is Coca de Sant Joan  – a sweet, brioche-style flatbread often made with candied fruits and lots of sugar, although you can also find it with pine nuts, cream, chocolate and even lardons. In the run-up to the 23rd, you’ll find them in all the bakeries and supermarkets, so you can’t miss them. They are quite expensive though (around 10 Euros) so you might want to split the cost with friends.

3. Stock up on booze

Don’t forget to wash down all that bread with the most Catalan of drinks  – cava! Whether you choose rosé or a classic white, it will make the sugary coca go down a treat.

You can find bangers and firecrackers at the many fireworks shops that pop up around 5 days before Sant Joan. Of course, remember to be very careful. Wear protective clothing if you’ll be anywhere near a fire, and if you’re celebrating at home, close your window and balcony doors to protect you from the very real risk of stray rockets landing in your home. Beware of groups of young children in the street, they tend to be armed and dangerous!

5. Find out what’s happening in your local area

Every neighbourhood or barri organises their own celebrations, so find out what’s happening in your area. Some barris organise meals outside on long tables for the neighbours, known as sopars populars, in addition to building huge fogueres (bonfires), live music performances, dancing and correfoc fire runs – people dressed up as devils who run around with firecrackers whizzing around their head (this is as mental as it sounds!). It’s quite a sight to behold, but do remember to keep a safe distance and wear protective clothing.

Check out what’s happening this year in the Official Sant Joan 2020 Programme.

One tradition you can see in many towns and cities is the arrival of the La Flama del Canigó, a fire which is carried down from the Pyrenean mountain of Canigó to various locations in Catalonia in the days leading up to the 24th June. Aside from being used to celebrate summer solstice (which actually falls on the 20th June this year), the tradition of spreading the flames from Canigó symbolises the persistence and vitality of Catalan culture. Ater touring the city streets, La Flama del Canigó arrives at Barcelona’s Plaça Sant Jaume in the early evening of Sant Joan. Often this will be accompanied by traditional sardana dancing, and parades of gegantsandcastellers. The flame at Plaça Sant Jaume will be used to light bonfires in the other barris.

6. Party till the sun comes up

There are so many ways to celebrate, whether that’s with your neighbours on the street, at a club or bar, or with your friends at home followed by a beach party (a popular combination). Another good option is to go up to a vantage point like Bunquers del Carmel which gives you spectacular views of the fireworks all over the city.

Wherever you choose to celebrate, one thing is certain – you won’t get much sleep. With eardrum-splitting bangs and explosions going off every few minutes, your chances of getting a good night’s sleep are virtually nil. And if you can’t beat ‘em, you may as well join ‘em. Plus, the 24th is a Catalan public holiday so you can have a long lie-in and sleep off any cava-induced hangover you may be nursing.

vIf you really don’t want to join the party, invest in some heavy-duty ear plugs, and if you have pets, you might even consider escaping to the countryside for a few days. I really can’t stress enough how loud it gets!

Watch this video to get a little flavour of what Sant Joan is like in Barcelona:https://www.youtube.com/watch?v=zeyy9kJNPs0

What are the origins and significance of Sant Joan?

Although the saint element might lead you to believe that it’s a Catholic celebration, its roots can actually be traced back to pagan festivities celebrating the summer solstice. It was only much later that the Catholic church made this midsummer party coincide with the birth of John the Baptist. In fact, seeing that it could still be considered a pagan festival, Spain’s dictator Franco tried to put a stop to the festivities, although the Catalans still continued to celebrate in secret.

Of course, the main protagonist here is fire. One tradition is to burn something you no longer need in a bonfire. This is said to cleanse your sins and bring good luck. Another is to write a wish, throw it into the fire and jump three times to make it come true. One for daredevils is to hold hands with a loved one and jump over the fire seven times to make you live happily ever after. You’re more likely to be scarred forever after though, so please don’t try it (although my fiancé will make me do it).

A far safer tradition is taking a midnight swim in the sea. According to the Catalan saying, “Bany de Sant Joan, salut per tot l’any”  (“bathe on Sant Joan and you’ll be healthy all year round”). So why not try a redemptive dip, and see if you’re cured of all aches and pains?

The herbs traditionally collected on Sant Joan are Thyme, Rosemary and Verbena. Because of this, the festivity is also known as La Verbena de Sant Joan. Verbena is a strong-smelling herb offered to the Gods in ancient times which is claimed to be an aphrodisiac. The restorative properties of herbs are believed to be particularly strong if picked on this night, so be wary of anyone offering you verbena!

How will it be celebrated this year?

In light of the COVID-19 epidemic, Sant Joan celebrations are likely to be on a much smaller scale this year. In Barcelona the beaches and chiringuitos (beach bars) will be closed from 8pm on Tuesday 23rd until 10am on Wednesday 24th in order to avoid mass gatherings and maintain social distancing. People can still meet in groups to celebrate, but should avoid large crowds where possible. We’re also advised to remain close to home to avoid mass movement around the city. The metro will be open until 2am on the morning of the 24th instead of running all night as it usually does for Sant Joan.

This year will certainly be different, but after long months of confinement, you can be sure people will be letting their hair down more than ever. So stay safe, enjoy, and Happy Sant Joan! Bona revetlla a tots!

Sending you sunshine and positivity from Barcelona!

If you liked this article, let me know in the comments below and share it with friends!

Top 5 Things to do for Free in Barcelona this Summer

Spain without Tourists - Nightmare or Utopia?