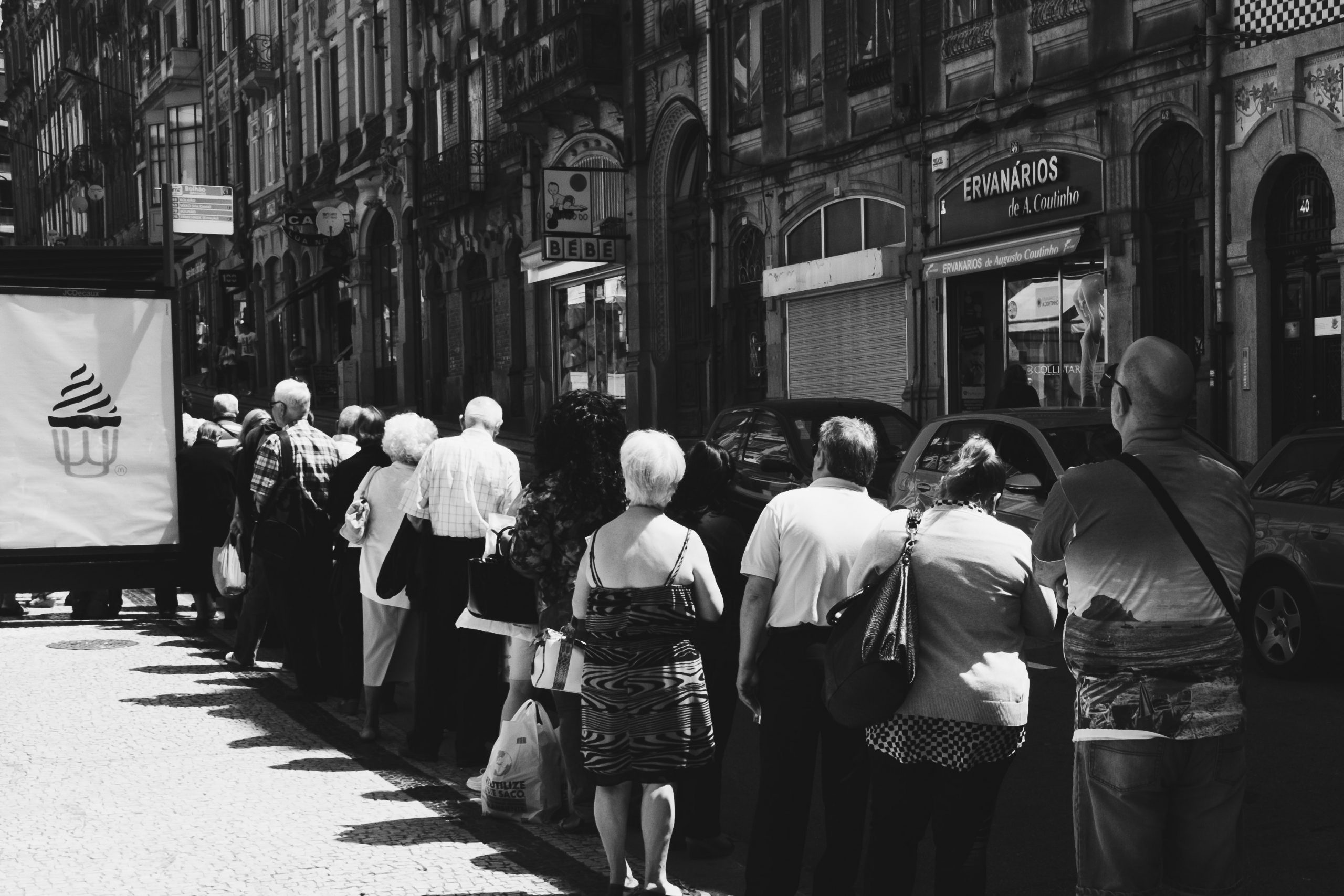 Last weekend I was talking with my Catalan friend about the 2017 security staff strike at Barcelona’s El Prat airport and the terrible three-hour queues that ensued. I was relaying with great mirth how the line of frustrated passengers looped around so many times that it started forming organic shapes, finishing with a flourish in an inward-spiralling snail which was almost impossible to get in or out of.

“That’s the problem!” sighed my friend, “If there’s no barrier telling people where to go, Spanish people just don’t know how to queue!”.

That got a giggle out of me, as this thought had definitely crossed my mind more than once. Coming from the UK, where queuing is one of the pillars of British society, I was shocked and appalled at the (apparent) lack of queuing when I first moved to Spain in 2016.

I’d be waiting for a bus and people would be standing around all higgledy-piggledy, making no sign of forming a queue and when the bus arrived people would just pile on, often meaning that the person who had just arrived five seconds ahead of the bus would get on well before the person who had already been waiting for ten minutes. This rattled my British bones, but everyone else carried on totally unperturbed by these seat usurpers.

Similarly at the bank, a place where you would imagine things would be done in a more orderly manner, I saw people sitting down and standing in all corners in some sort of scatter diagram formation, but nowhere did I see any resemblance of a queue. Such a situation was beyond stressful for me. Were these people going to push in front of me here too, scuppering my chances of being served before the bank’s 2pm closing time?!

Well, the answer was no. After agonising for several minutes over the lack of any visible queue, someone else walked into the bank and calmly inquired “¿El ultimo?”. I had no idea what he was talking about until, seeing my lack of response, someone pointed me out. I, much to my surprise, was indeed “the last one”.

What I found out that day was that whilst there was no visible queue, there definitely was a queuing system, and one that works very well actually. Instead of standing around uncomfortably in a line shuffling forward every few minutes like robots, in Spain you simply ask who the last person was to enter the establishment, then sit back and relax and when that person has been served, you know it’s your turn. Ingenious! Why have we never thought of this?

And this can be seen not just in banks but also in pharmacies, public toilets, at deli counters, or almost anywhere you could expect a line to be formed. Spaniards seem to enjoy a much more flexible way of queuing which even allows you to leave the premises to do an errand, and then come back without losing your place. (I am far too nervous to try this myself of course, taking my friend’s word for it.)

Similarly, a more relaxed approach to being served can be seen in Spanish bars. Whilst we don’t normally wait in formal queues in British pubs, highlighting perhaps how absurd it is that we insist on lines in only some hallowed places, you will definitely be keeping a fierce eye on who arrived before and after you at the bar, with dire consequences for anyone who dares to jump this invisible queue you have formed in your head. In Spain you definitely won’t be queuing at the bar because the waiters will come to you. Again, ingenious! Who wants to spend their Saturday night jostling for position at the bar when you could kick back and relax at your table instead, giving you more time to enjoy that refreshing glass of sangria?

Truthfully, it’s not that straight-forward though. In a lot of Spanish bars you will have to make the effort to be served, letting the staff know you are actually indeed a willing, paying customer, and you will probably get glowered at for breaking up their apparently riveting conversations with their colleagues. They don’t usually wait around for you to make up your mind either so you had better know your order right off the bat as it is very unlikely you will be offered a menu without having to ask for it first, further adding time onto your wait… but I digress.

So, you might not be served quickly, the service will probably not be the most efficient, but by having table service at almost all Spanish bars (including at Irish pubs in Spain, which confuses me every time) you will be able to spend more time with your friends and family sitting around a table chatting and having a good time, instead of losing half of your night queuing at the bar.

That’s all very well and good, they’re queuing in banks and have a system which works well enough in bars, but what about those Spanish scoundrels queue-jumping at bus stops you ask? Well, I’m not sure, but I do know that it really doesn’t seem to ruffle many feathers. Just like getting on a train or metro, the people who reach the door first get on first, with special consideration given to old people, kids and disabled people in the best of cases. It is not uncommon at all to see young children (!) thoughtfully call across the carriage to a standing elderly person to offer a free seat.

And what about the spiralling Queue of Doom that formed in front of airport security? At first, everyone had a good chuckle about it (the comical absurdity of the situation overriding the anxiety about missing flights) and eventually a sweating, portly man stumbled over and simply ushered all the people trapped in the spiral to a new entrance that seemed to have just materialised out of nowhere – where there’s a will there’s a way.

Maybe us Brits are the crazy ones, pedantically forming queues in all sorts of arbitrary situations. Our Spanish cousins may be famously criticised for their alleged lack of any queuing etiquette, but they actually do it much better: with a lack of any visible line, in as much comfort as possible, with a lot of flexibility when the situation demands it, and not at all for any mode of public transport, because even if you don’t get a seat, someone more deserving will.

Thank you for reading, and as always, sending you sunshine and positivity from Barcelona.

What do you think about queuing in Spain? Does queuing differ in your home country and if so, how? I would love to hear from you in the comments below.

A Hospital You Wouldn’t Want To Leave