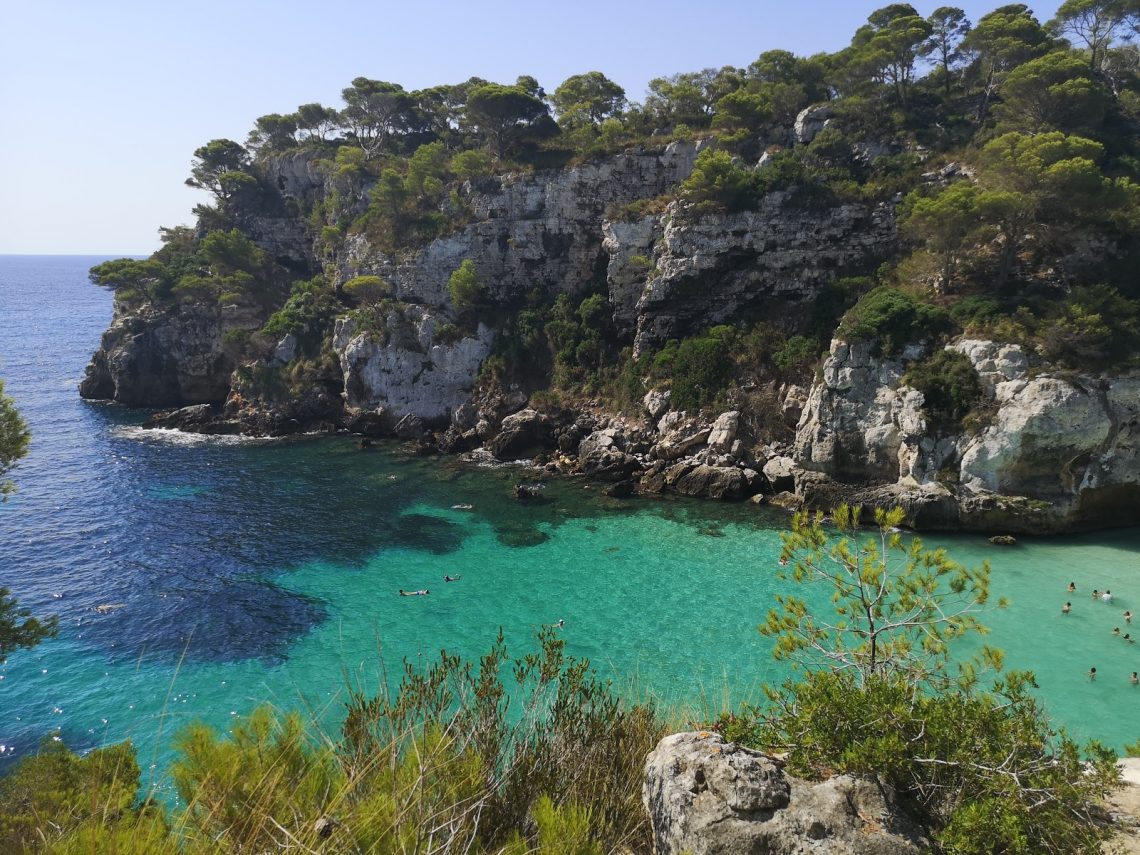 Hi everyone! Long time no speak! You may have noticed I’ve been very quiet on the blogging front this summer, but now after a wonderful island getaway in the Balearics, I’ve returned to Barcelona relaxed, refreshed and full of energy and ideas for Across the Water.

If you follow my adventures on Instagram, you’ll know that I LOVE Menorca! I’m a self-confessed travelholic who is addicted to visiting new countries (37 so far), but I already know I’m going to go back to Menorca again and again. Find out why I’m so besotted with this Mediterranean jewel and why you will be too in 5 Reasons To Make Menorca Your Next Holiday.

While far from being an extensive list, here are some of our favourite beaches and calas which can serve as a starting point for your Menorcan adventure:

Cala en Forcat –  A 10-minute walk from Cala en Brut, this fork shaped cove is a relaxing spot to spend the day lazing around on your inflatables.

Cala Macarella/Cala Macarelleta – The island’s most famous beaches, you’ll have to get here early in high season to find a spot, but I think you’ll agree that the views are worth it.

Note: In order to mitigate visitors’ environmental impact, cars are not allowed to park at Cala Macarella/Macarelleta in high season so your choices include walking (around 20 minutes from Cala Galdana) or taking the very easy and efficient Macarella shuttle bus.

Cala en Turqueta –  The name, ‘Turquoise Cove’,  tells you everything you need to know. Get here before 9am to nab one of the limited parking spaces, or alternatively walk or take the bus.

Menorca is a very unusual part of Spain in that wine is not its typical drink. (And in fact, after trying some of the local wines I would say that you can give them a miss).

If you’re thinking that’s not traditionally Mediterranean, you’d be right. It was introduced in the 18th century when the island was under British occupation. British soldiers missed the drink so much they had a distillery built. Fast forward to today and you can’t visit any traditional shop or bar that doesn’t sell the local Xoriguer gin. At around 12 Euros a bottle, it’s an affordable and delicious souvenir.

But before you go reaching for your tonic water, STOP! In Menorca, the classic combo is gin amb llimonada (gin and cloudy lemonade). This incredibly zingy summer tipple goes down dangerously easily and also comes in a refreshing slush form (ask for granizado). You’ll soon be addicted and wondering why you hadn’t made it before!

If you want to make your own at home, check out this very simple recipe.

Beaten only by tiny Formentera, Menorca is the second-smallest Balearic Island. This makes getting around a breeze. It’s so small that you can drive the entire length of the island (on a wonderfully bump- and traffic-free road) in under an hour! What’s more, you can actually walk around the entire circumference of the island on the ancient Camí de Cavalls (The Horses’ Path) – a 186km long footpath thought to have been built in the fourteenth century. Originally designed to protect and control the island, this path was patrolled by soldiers on Menorquin horses and in fact today many people still do the route on horseback*.

El Camí de Cavalls is a wonderful way to explore every nook and cranny of the island and reach even the most inaccessible beaches. With 20 main walks ranging from easy to difficult, there are plenty of options for every walker.

As we visited in August when daily temperatures were 30℃ and above, we decided to give the walks a miss, but we are already planning on returning in spring and autumn and bringing our walking shoes!

*On the subject of horses, we would strongly recommend that you visit the Trebaluger Equine Rescue Centre, a non-profit dedicated to the care and rescue of abandoned, neglected and abused horses, donkeys and ponies. This is a fantastic place to come and spend time with some of the island’s most beautiful animals and find out more about the crucial rehabilitation work going on in Trebaluger. Get in touch with Sam to arrange a visit.

A UNESCO Biosphere Reserve since 1993, Menorca is the perfect destination if you want to get off the beaten track and lose yourself in nature. With five natural reserves, nineteen Natural Areas of Special Interest, a natural park and a marine reserve, Menorca really is a nature lover’s paradise.

As the most northern and eastern of the Balearic Islands, Menorca is also the rainiest and windiest. Don’t let that put you off though. This makes Menorca the greenest of all the Balearics. Nowhere is this more evident than in the Albufera Natural Park at Es Grau – a water-marsh area comprising a spring water lagoon separated from the sea by a sand barrier and home to hundreds of different bird species.

We were extremely impressed by how well-kept and responsibly managed the island is, despite the annual summer influx of tourists. Menorca was definitely one of the cleanest and most beautiful islands we’ve ever visited!

In comparison to one of her bigger and brasher sisters, Menorca is often overlooked. To put this into perspective, Menorca receives just around 1 million tourists a year compared to 14 million in Mallorca! This is one of the many reasons I’ve fallen in love with Menorca and already have plans to go back.

Menorca is quiet. Menorca doesn’t pretend to be anything it’s not. It doesn’t boast, make false promises or try too hard to impress. This down-to-earth vibe permeates throughout the entire island, putting you at ease from the moment you set foot on shore.

It says “Hi there, I’m Menorca, a Mediterranean island where you can spend a relaxing holiday with your loved ones.”

Nothing more, nothing less.

So when you get to the island, you’re pleasantly surprised by just how incredible it is.

Even in August, we found beaches without a single person and it was always possible to social distance, even at the most popular spots. Admittedly we did visit during a pandemic, but it was still high season and it was easy to find free parking. We often didn’t pass anyone on the street and occasionally had entire beaches to ourselves. Locals actually complain that it gets too quiet in winter. So if you don’t want to deal with the habitual hordes at other Mediterranean destinations, visit Menorca and soak up the tranquility.

Interestingly, part of the reason Menorca is largely free of mass tourism is due to Spain’s late dictator Franco. During Spain’s Civil War (1936-1939) both Mallorca and Ibiza supported Franco and the Nationalist faction. Menorca did not. When the Nationalists took the island in 1939, Franco refused Menorca any access to public building funds during his 36 year regime. So because of his grudge, while Ibiza and Malllorca were increasingly built up, Menorca preserved her original charm.

So what are you waiting for? Schedule a date with this natural beauty now!

How to get to Menorca

Fly: Most major European airports have direct flights to Mahón.

Ferry: Sail from Barcelona or Valencia. Check out Balearia and Transmediterránea for tickets and schedule.

Sending you sunshine and positivity as always!

Have you been to Menorca? Let me know your holiday highlights below. And don’t hesitate to get it touch for any tips or advice!

Spain without Tourists - Nightmare or Utopia?

10 Things That Surprise A First-Time Visitor To Greece